Spring is officially here: the new season's yarns have arrived! Here's a round-up of the new kids from Sirdar and Sublime. 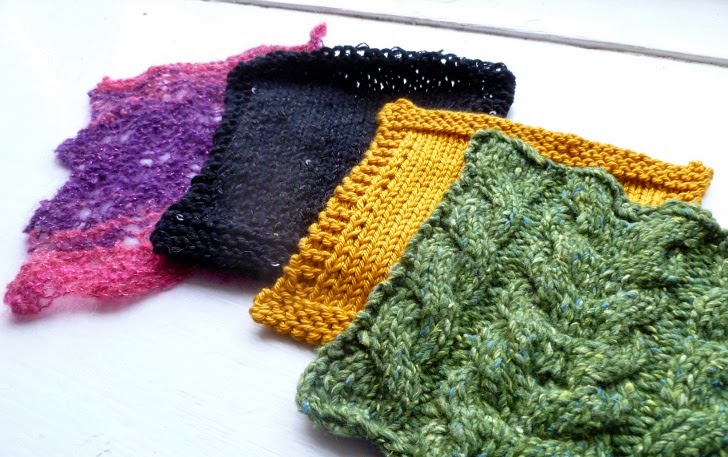 Sirdar's new Soukie DK is a cotton/acrylic/polyester blend, soft to the touch with a silky, darker thread wrapped loosely around the yarn's core onto which small sequins have been threaded at 3-4 cm intervals. My impression of this yarn from looking at it in the ball was that the yarny part was very soft but I was concerned that the sequins would feel prickly against the skin. 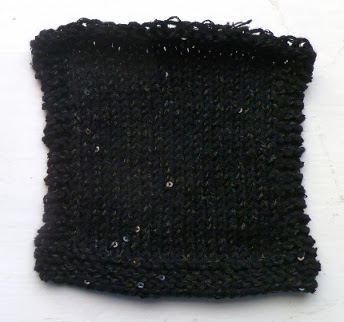 The Knitting
I found the cast on a little tricky (I used a knitted cast on throughout) as the sequins kept getting caught in my stitches. I suspect that this was simply due to my not being used to the yarn, however, as the sequins were not a problem during the remainder of the knitting and I barely noticed them slipping past my fingers. One other point to note about Soukie DK is that the yarn is very loosely spun so, if you're prone to splitting the yarn when you knit, this is something you'll want to watch out for.

The Fabric
The stocking stitch fabric I produced has a lovely bounce to it and the stitches are nice and even. Soaking it in warm, soapy water led to no visible loss of colour and it has maintained these qualities after blocking. The sequined fabric is impressively soft and doesn't feel prickly against the skin.

The little sister to last year's Luxurious Aran Tweed, this DK weight cotton/wool blend yarn is similar to its predecessor in many ways, but differs in fibre composition as it lacks the 20% llama present in the aran weight version. In the ball, the Luxurious Tweed DK is a beautiful (why yes I am biased towards tweeds of every form!) rustic, single spun yarn with bright flecks spun throughout. 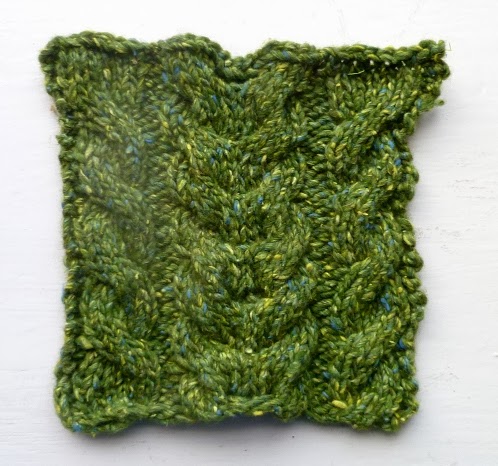 The Knitting
The yarn has very little 'give', so I would advise casting on more loosely than usual. I also found the texture of the yarn to be less even than it looked, though I quickly got used to it. There are occasionally small pieces of plant matter spun into the yarn, which I genuinely feel adds to its charm and reminds me that the wool once belonged to a sheep.

The Fabric
The tweedy flecks throughout the yarn are surprisingly unobtrusive. They are bright but subtle enough not to overpower lace or cable patterns. The fabric is thick and soft, though it has the potential to pricke if you don't manage to remove all the plant-bits during the knitting! After washing, my swatch grew in width but not in length and the cables look lovely and even.

Sirdar's answer to Patons' 100% Cotton DK and Wendy's Supreme Luxury Cotton DK has a subtle mercerised sheen and cleanly designed packaging that set it up as a strong rival to these two established favourites. 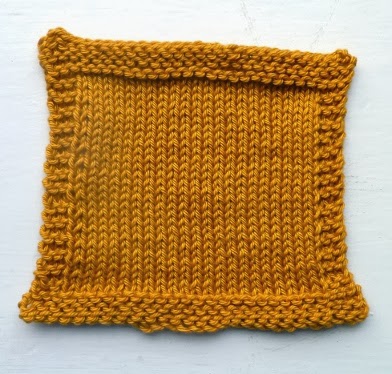 The Knitting
This yarn was a delight to work with. Its texture is soft and even and it was easy to rip back mistakes and reknit them without the yarn showing any sign of wear or splitting. I found it very forgiving in this respect, though it was less accommodating when it came to its crisp stitch definition- such a smooth yarn means that mistakes or uneven knitting can be easily spotted. The yarn was incredibly slippery to knit on aluminium needles, and I found it easier to control when I switched to bamboo needles.

The Fabric
I found the fabric produced by this yarn to be softer and more elastic than the fabric of many other mercerised cottons I've encountered. It softened slightly after washing and did not become stretched out after blocking. 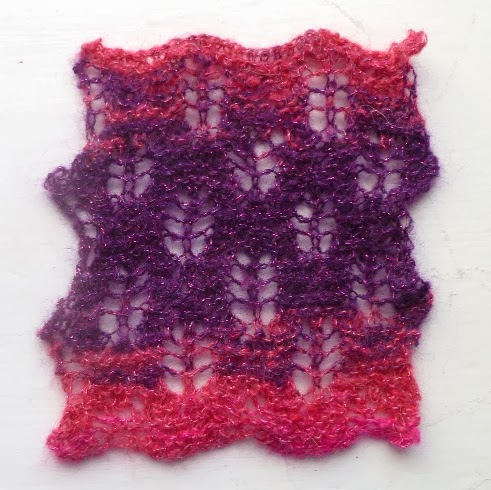 The Knitting
Unlike with Soukie, I had no problems with splitting when casting on and knitting with Hush. It has a soft handle and the fluffy fibres did not matt in the ball. Ripping back was fairly pain-free for a mohair blend, though I was unable to salvage and re-use the cast on edge. I found that, partly due to how thin it was and partly due to its inelastic structure, it was easier to knit with aluminium needles than with bamboo, as the yarn was able to slide more freely along the needle.

The Fabric
The knitted fabric is very light and airy and the stitches of my lace pattern are well defined. The colour change does not obscure the stitch pattern, nor does the halo of the yarn. My lace swatch washed well and blocked very nicely, producing a fabric that does not try to return to its previous shape and lies flat.

So there we have it, if you're looking for a new yarn for your first Spring project of 2014, any one of these would be an excellent choice!